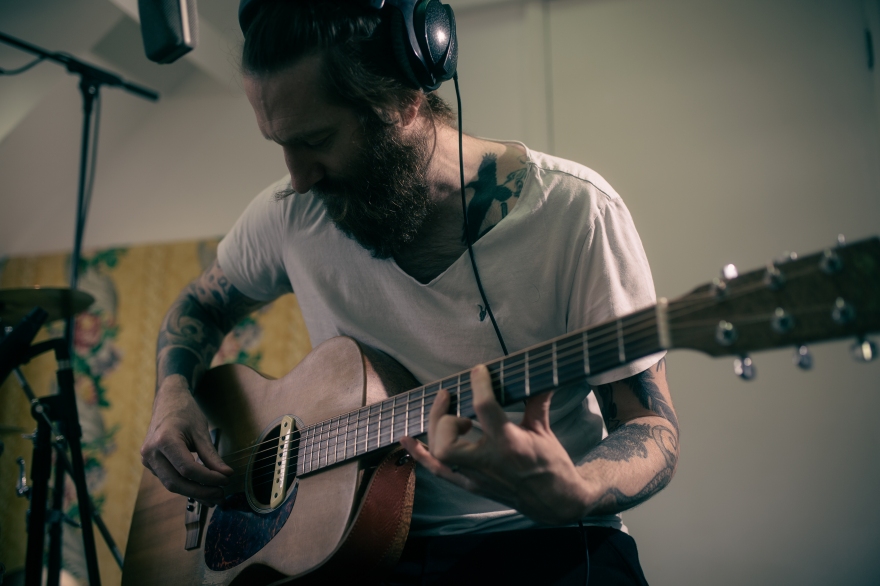 I’ve shared a few photos of the sessions but not said much about it. Busy, busy, busy.

First time I met Lukas has significance to me, I’m an imprinted baby duck. I was walking around London with Josienne, feeling thoroughly out of my depth, a little scared of how big & proper it all was, when this famous bloke said hello to us both. Not just to Josienne, though he seemed to mean his hello to her as well, but also to me, like I had just as much right to be there as her and like he was pleased to see us both! In a town where most people at best treated me like I was in the way or on many occasions, openly expressed derision at my presence & involvement. Here was Lukas frickin Drinkwater just casually saying hello to me, in the street! I probably didn’t even say anything back because I couldn’t believe it. Later, we went to the Americana Music awards and Emily Barker treated me like an old friend. I could’ve cried. I might actually have done, because Patrick Stewart’s partner asked me if I was alright while I was standing at the bar and I said I was, it was just a bit overwhelming and thanked her for her kindness and I thought to myself, damn. Maybe I can do this, maybe some people won’t mind me being in the room, one day.

Anyway, here we are a few years later & I am doing it. Living some kind of life. Being the person I appear to be. Living in an honest way that I wrestled from the jaws of loss. Surrounded by love & support. It takes a while to recognise it when it changes, but lives can & will change and I think it’s important to call it what it is when it happens.

And so I wrote some songs about that, about that hope, about that progress, because what else am I going to do? I didn’t have lots, but it felt like a whole thing regardless, a signpost of where I live right now, still yearning for more, hoping the stairs lead up & that there is a reason to climb, however distant it might seem.

My last album, ‘I Used To Be Sad & Then I Forgot’, I once described as like that tiny dog who goes around starting fights with all the bigger dogs, barking in their faces as they look on bemused. That’s how I feel I sound, listening back, now. I’m still very proud of that record and what I achieved with it. It grounded me, made me certain of exactly what my place in things was. I had as much right as anyone else to exist. Songlines Magazine reviewed my record & didn’t hate it.

But these new songs, they’re bigger. I knew I needed more instruments than I had last time. And there was really only two people I needed to help me. Josienne was going to produce, that was always clear. What else would I want to do? It’s her decision making. Her discernment. Is an idea good, or bad? She just knows. But I had this dream that Lukas might be able to help, too. What a line up that felt like. So I out & asked him and he went and said yes.

We spent 3 days in his studio, Polyphonic Recording, in Stroud. It’s a dream location, and I don’t just mean because it’s a one minute walk from a waitrose with a sushi counter, though it is that too. It’s a perfect playground. Tbh, it’s everything I ever dreamed of that I never made happen for myself. I don’t really understand sound like I understand light. Light is obvious, sound is a twat. But not to Lukas – his level of skill in every instrument he plays (which is, best I can tell, all of them…) is unsurpassed. His judgement, creativity, approach to creating a safe space, sense of humour, it’s all perfection. I knew it would be. He’s funny & serious at all the right times. It’s hard to get me to perform stuff, vocally. These lyrics are pretty raw to me. I can’t do it just anywhere, in front of just anyone. But I could do it easily, with him. If this all sounds a little saccharine then, good, it’s meant to. When I called him one of my favourite people, I meant it. If you’re considering making a record then you should have him & his studio on the list. I can’t imagine a thing he couldn’t do. Recording is such a weird type of magic, but not if you understand it intuitively, in a way that I don’t. Lukas does.

We recorded 5 songs, an EP. Lukas is mixing it now. It’s a bigger sound than the album, a full band. I don’t want to say too much about it other than that for now, but I do have (…no shit…) lots of photographs from the recording sessions. I took these because I loved it, and taking photographs / using cameras & lenses is fun, like microphones & guitars are to Lukas, and also, so Lukas could use them on his website.

See what happens if you work in an atmosphere of mutual respect, lifting people up & being lifted yourself? See what can happen if you work, free to fail, free of shame, free of threat? In an atmosphere that encourages individuality of expression, where some ideas are awful but have them anyway and believe that your friends will have your best interests at heart when they say “do it” or “shut up”? What if that led to everyone being a little better after than they were before, to some kind of personal growth & the making of honest art?

Well, here are some photographs of that happening.

Thanks for working with me, Josienne & Lukas.

© Alec Bowman_Clarke 2021. Unauthorised use and/or duplication of this material without express and written permission from this site’s author and/or owner is strictly prohibited. Excerpts and links may be used, provided that full and clear credit is given to Alec Bowman_Clarke with appropriate and specific direction to the original content.